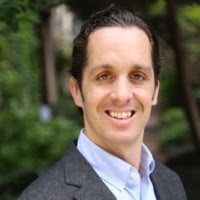 Rob was initiated into Gamma-Rho chapter in 2000. He was the Grand Procurator during his sophomore year. He studied abroad during his junior year. While he was away, 9/11 occurred and it left Rob profoundly affected. He struggled during this time and nearly everything seemed meaningless because he was so angry about the attack on our country. During this time, he became a more serious student and spent less time at the fraternity house, however, he lived with brothers from the house separately.

Though Rob distanced himself from the chapter house after 9/11, he did not fully understand the lasting impact of the friendships he had formed at Kappa Sigma. At the time, he felt like he needed to pursue something that was deeply personal. After college, he joined the SEAL teams, which is a tightly knit brotherhood. No one truly achieves anything great unless they are part of a team. He traded one brotherhood for another.

Rob had Kappa Sigma’s at his wedding and has called upon the advice of brothers through every significant event of his life. As time has passed, the lasting friendships from the fraternity remain an integral component of his support network. Rob wants undergrads to know that it is alright if you do not know what you want to do when you grow up. He advises to find a mission in life and devote yourself to it. You should chase the feeling of butterflies in your stomach because it means you’re nervous and about to take a big chance. The best things in life happen after the butterflies.

In 2014, he attended the University of Pennsylvania and received his MBA from The Wharton School. After completing his MBA, Rob landed a job as an Amazon Pathways Operations Managers and worked here until 2018. Since 2018, he has been working for ZeroEyes as Co-founder and Chief Operating Officer. ZeroEyes is a company that uses existing video cameras and artificial intelligence to save lives. They are trying to prevent mass shooting in America. This company is closing its seed financing round and entering the market. Rob believes that this company will make a difference in the world.  Rob is married to his wife, Monica, and they have 3 daughters: Audrey (5), Amelia (2), and Adeline (3 months old).