Our Alumni Association/Housing Corporation Board directors meet quarterly in Tucson, Phoenix, Pinetop or San Diego. If you would like to join our board, please send us an email.

Scott Gimple ’90 - President
As a Gamma-Rho initiate (’90), Scott graduated from the University of Arizona in 1992 with a BA in Political Science, and from  Perpperdine University with a MBA in Finance. He is the Director of Player Development and National Events for American Youth Soccer Organization, a youth sports organization with over 550,000 players and 200,000 volunteers. Scott lives in Hermosa Beach with his wife (Catherine) and three step-children (Alexandria, Derek and Annika). 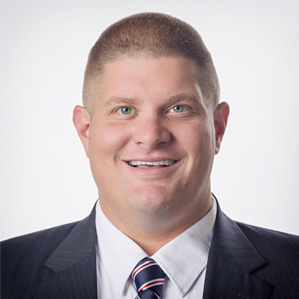 Paul Clapp ’04 - Secretary
Paul Clapp is a 2004 Graduate of John Carroll University where he was a founding father of the Xi-Tau Chapter of Kappa Sigma in 2002. After graduation, he moved to Tucson and became the Alumnus Advisor and live in advisor for Gamma-Rho from 2004-2005. Since that time, he has remained active with the alumni, and is a part of the Chapter’s Century Club.

Paul is an Account Manager in the US Channel for Hyland Software, Inc which is a global software origination who develop OnBase, an Enterprise Content Services solution. Paul and his wife, Maggie O’Neill, live in Cleveland, Ohio and have been married since 2015.